Loooong post ahead, and chock-full of dorky goodness.  Just a warning :)
(I won't feel bad if you ignore this one)

Last weekend was New York Comic Con...I look forward to it every year, especially since I always wear a costume!  hehe.  Sadly, Dave did not cosplay- it's kind of a long story, but basically we didn't realize that we would be able to attend on the same day until that week (due to sold out tickets and such!)

I've always wanted to dress up as Clobberella.  If you are familiar with the cartoon Futurama, you might know of the character.  In one episode (yes, I was a character that only exists for 20 minutes!) the "gang" acquires a tube of Miracle Cream from Dr. Zoidberg, and they discover that the cream gives them super powers!  Leela's alter ego on the New Justice Team is Clobberella.  Here's what I was going for: 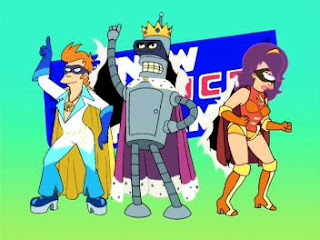 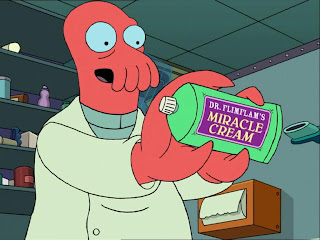 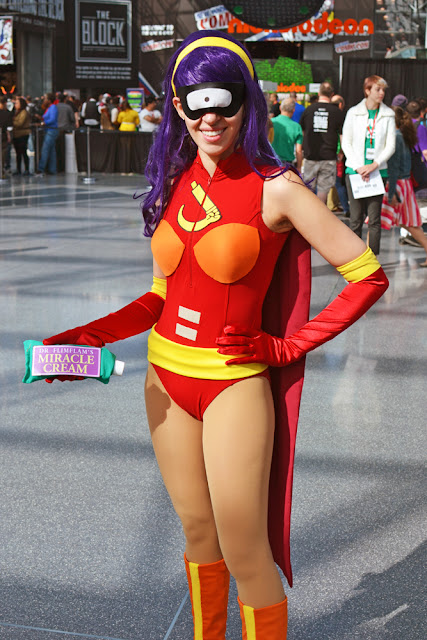 Ok...I'm sorry, but this ends up being my pose for a lot of the photos.  I was hoping to practice dynamic poses and whatnot, but once I got to the con I ended up defaulting with this!

I was so thrilled when I arrived to see a familiar face...there was a couple dressed as Scruffy and his wash bucket! haha!! 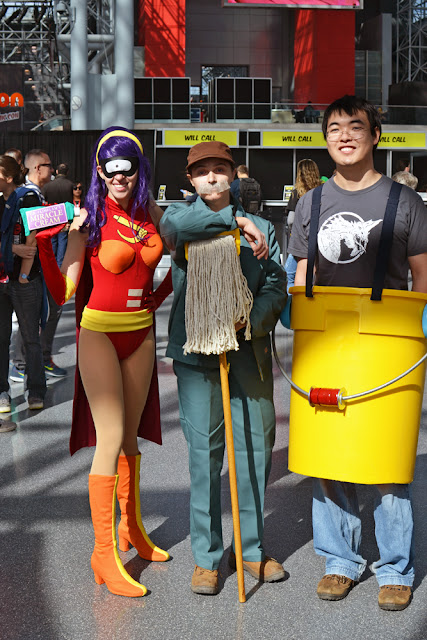 I also ran into a Professor Farnsworth and Dr. Zoidberg... 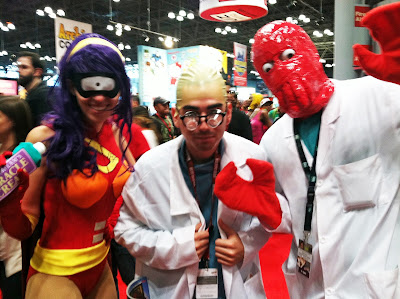 ...as well as Zapp Brannigan and Kif!  I'm so sad that I didn't get a copy of the picture I took with them (someone else snapped the photo, then they disappeared!) 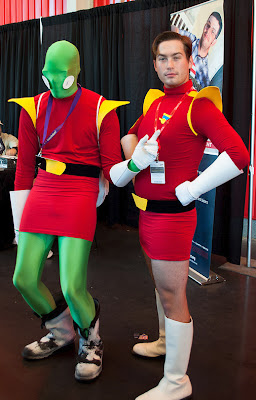 As we were posing for the photo, Zapp was in character- he had his arm around me and was whispering creepy things to me in the Zapp voice- things that he would likely say to Leela on the show (or was he just being creepy for real? I'll never know...)

A bunch of people wanted to take my picture, and I found them popping up on the internet this past week.  Here are a few highlights: 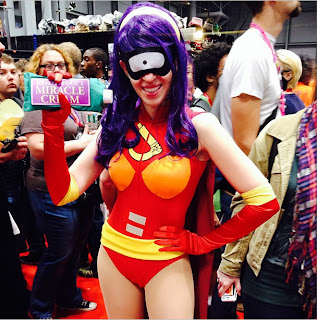 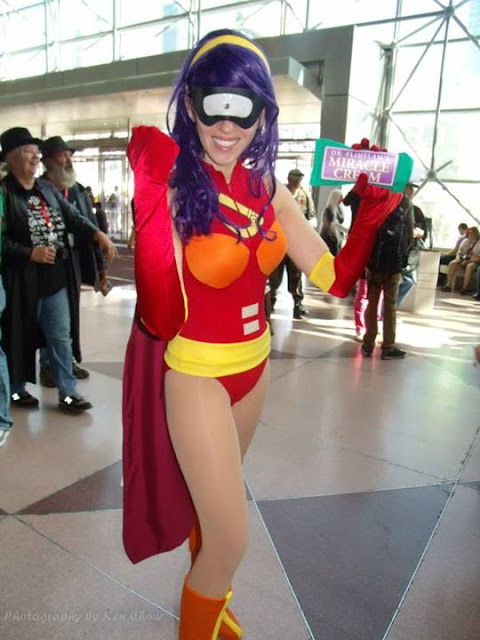 This is probably the most unique picture, by some guy who was hired by Destructoid to take some photos of cosplayers: 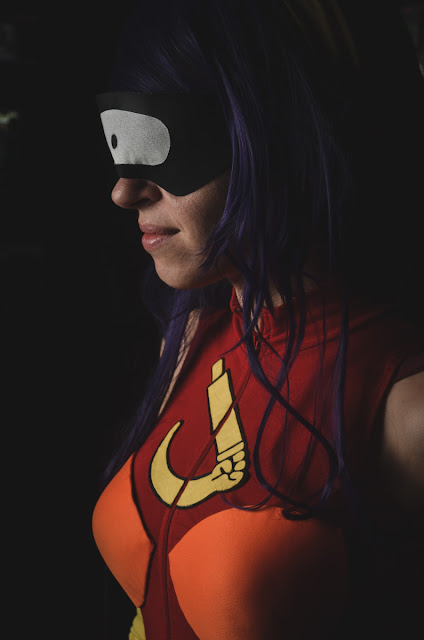 Someone even said that my costume was in their top 10 of the whole convention!  Awww...that makes the effort of making the costume all worth it!!

Speaking of making the costume, I'll give you the quick rundown in case you were curious about my DIY. 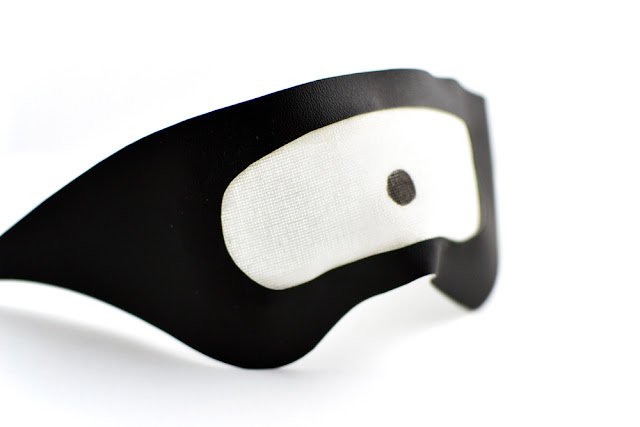 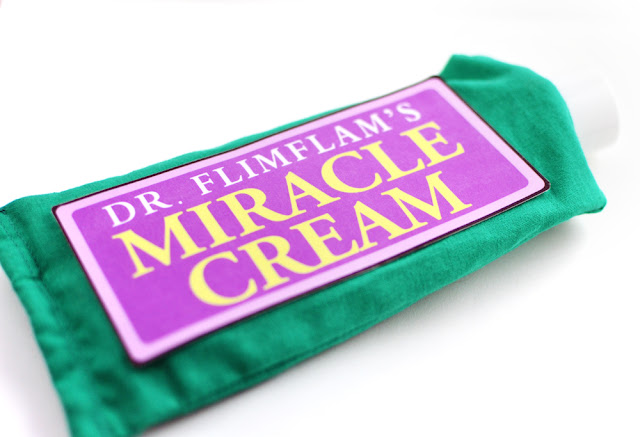 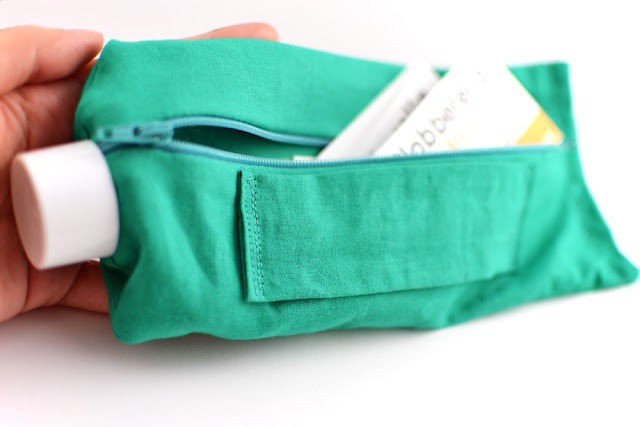 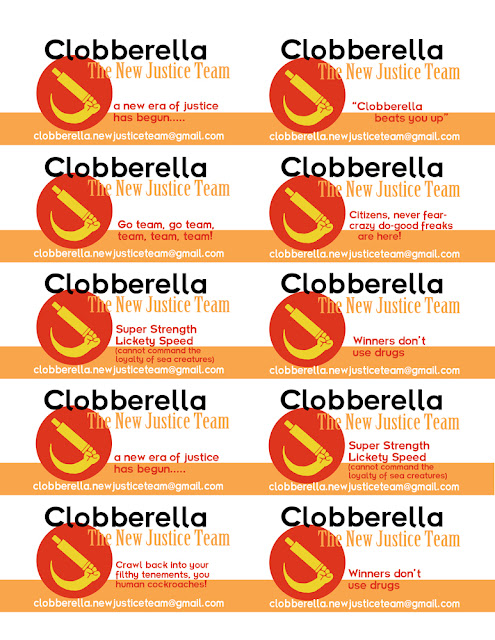 I went in costume on Saturday, then roamed the show floor with Dave on Sunday.  I encountered some more awesome costumes! 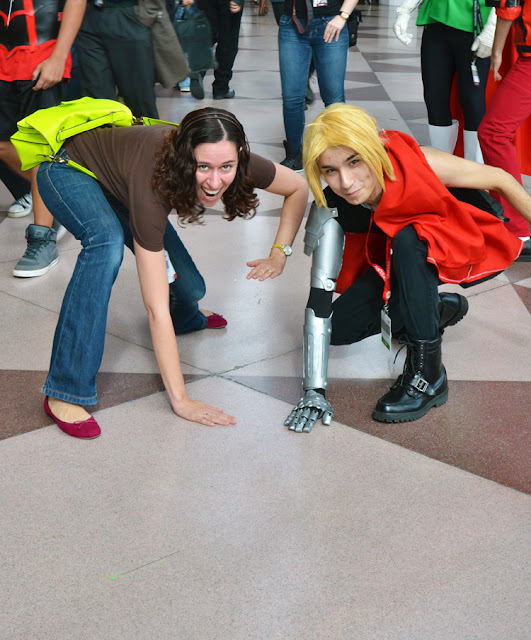 This is Edward Elric from the anime "Fullmetal Alchemist."  He and I are pretending to use a transmutation circle! 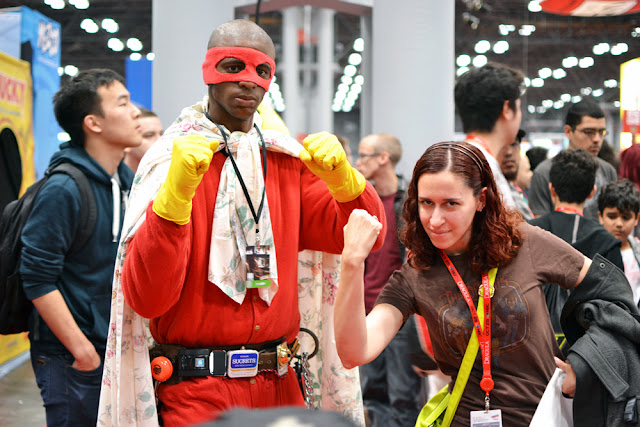 Oh my gosh...Blankman!  Do you remember him? This guy was spot-on. 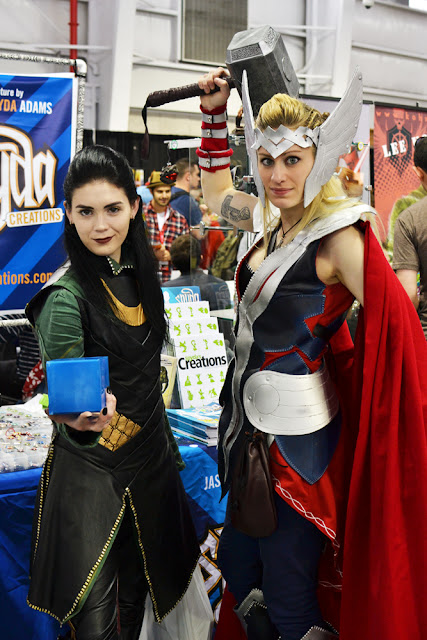 Excellent crossplay (genderswapped) Loki and Thor. I love and appreciate the handmade details in their costumes.  I also love that they weren't "sexy Loki and Thor"- too many chicks at Comic Con do that. 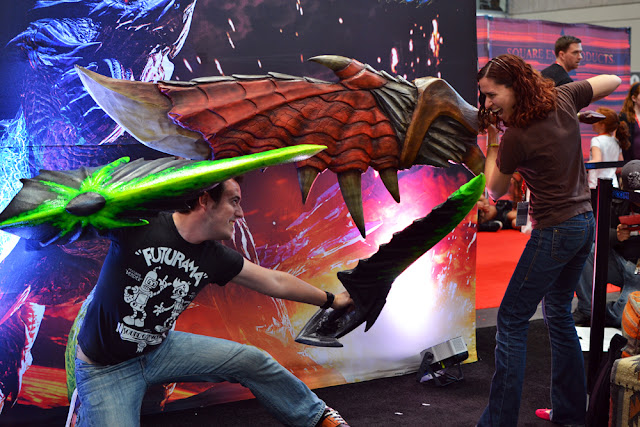 Of course, the main attraction at Comic Con is (or at least it should be) comics!  My favorite thing to do at a convention is walk down Artists' Alley, and meet the people behind the artwork.  I always stop by David Mack's booth (sorry, no photo of him)- his paintings are so inspiring!  I especially love what he does for Kabuki- I don't actually read those comics, but I have them and look at the gorgeous pictures!

Another inspiration, Alex Maleev- we snapped a pic as he was painting.. awesome! 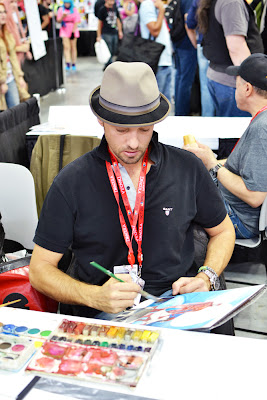 We bought a sketch from Scott Kolins (and grabbed a shot of him drawing): 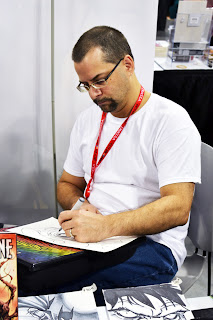 Here it is, hanging on our wall- we have a rotating display of sketches we get, and now this creepy Harley Quinn has a special place right in the center! 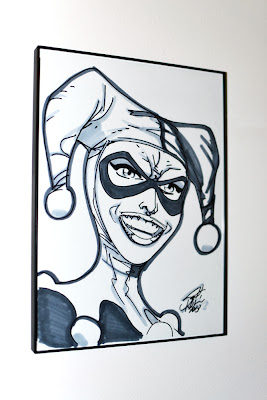 Speaking of our comic artwork, in our hallway, across from the sketches I just mentioned, we have a wall of original comic pages.  These are awesome.  I love seeing the little pencil marks and sketch marks that disappear when they get scanned in for printing. It's cool to compare them with the final page from the comic book, which we display below each one. 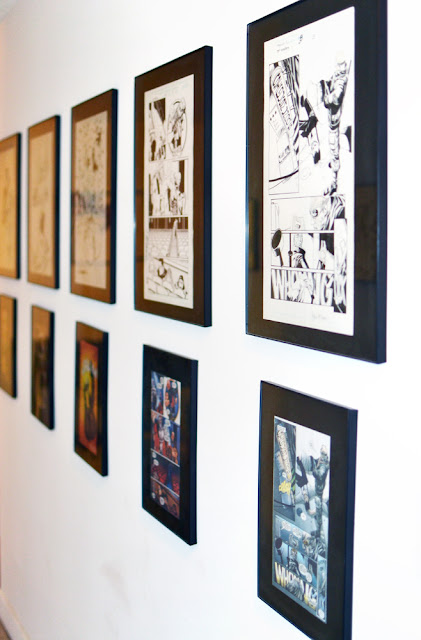 I still need to share pics from PAX '13, and I hope to post pictures from the conventions in prior years too.

If you don't care about costumes, don't worry- I have a few cards I've made recently that I still need to photograph- they should be coming soon!

Posted by Jennifer Rzasa at 9:48 PM